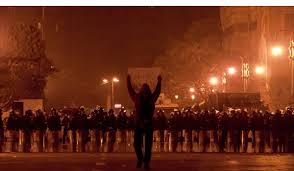 1.Â  Egypt and the end of Mubarak

Protests began roughly on January 25, 2011, and a week later Egyptian president Hosni Mubarak announced that he would *finally* step down from his three decade rule.Â  Protests had been mostly peaceful up until the end of the week, and its images have saturated the news.Â  Egypt shut down the internet, and Google, Twitter and Say-Now teamed up to help Egyptians get their voice heard across the world amidst the online blackout by providing a call-in service that would translate to post updates via Twitter.Â  It’s amazing how social media has changed our world.Â  Truly. For one of the first times in my life I’m actually looking forward to the Super Bowl for the sake of watching football.Â  Not for any deep reason, mind you, but because I recently converted into the Steeler Nation. I wear Steelers gear and shout obnoxiously at the screen during games.Â  Hubs says he has a hard time telling the difference between when I’m playing Assassin’s Creed or watching football by judging my maniacal laughing/taunting.Â  Hmm…shenk a bitch or a Harrison tackle?Â  All I have to say is Clay Matthews better watchit.

My boy Phil didn’t see his shadow, which means spring should rear is head in six or so weeks.Â  Yeeeaahh…I’ll believe it when I see it. I had to dodge falling ice bombs of doom in the morning and by the afternoon it was nearly 50 degrees.Â  Maybe Phil talked to his dealer and convinced him to slip Mother Nature some bipolar meds.

Hide yo’ bacon.Â  These five guys are out to make the craziest, most insane shite I’ve ever seen using mostly Jack Daniels, bacon, and a vomit-inducing amount of deep fat frying.Â  If you can get through any of their videos without cringing or having to look away, I effing salute you.Â  You Tube: www.youtube.com/user/EpicMealTime