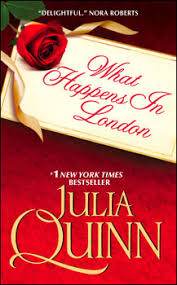 Olivia Bevelstoke is not only strikingly beautiful, she’s also intelligent and witty.Â  She also is plagued by a rumor a friend planted in her ear – her handsome new neighbor may have murdered his fiancee.Â  Olivia doesn’t believe it, but her intrigue leads her to spy on him from her window.Â  Deftly dodging and ducking behind her curtains, she watches him for days an finds him…somewhat boring.Â  So boring it’s unusual.

Sir Harry Valentine isn’t fooled for a moment – he knows he’s being watched.Â  He works for Britain’s Home Office, for heaven’s sake, so he’s used to watching his back.Â  At first he finds his beautiful neighbor’s spying annoying, but gradually he finds ways to passively throw her off.Â  Like donning a Robin Hood-esque hat w/ full plumage, or considering breaking out a full-on jig atop his desk.Â  For no other reason than to distract her.Â  Oh, and also to make himself less annoyed with the fact her presence is distracting him from his job of translating top secret government documents.

Their paths eventually cross, and their first meetings are tense.Â  It’s pretty obvious they both dislike one another.Â  Olivia won’t openly admit she had been spying on Harry, and Harry provokes her by dropping little hints that he’s on to her game.Â Â  Their relationship begins to change, however, after several encounters invovling “lurid gothic fiction,” a Russian Prince, and an order from the Home Office declaring Harry make it his business to know Olivia.Â  The two fall in love, and their pursuit of one another is hysterical.

I really enjoyed this book.Â  This was the first novel I’ve read by Julia Quinn, and I imagine I’ll be reading more.Â  I’m curious about The Bevelstoke Series and what characters Quinn follows.Â  Right off the bat Quinn comes swinging with sarcasm and dry humor.Â  Olivia is a hoot – she’s smart and doesn’t take a lot of crap, whether from her own family or from her friends.Â  Her fiery nature doesn’t deplete her compassion for those around her, however – she’s very endearing.Â  Sir Harry, of course, matches her toe-to-toe with his wit.Â  The dialogue between the two is probably some of the best I’ve read so far.Â  And the situations Quinn has them in…just…wow.

This novel officially falls in my “made me laugh out loud and wake up my husband at 11:30 in the evening” category.Â  This is romance at its best.Â  Not a lot of smexy time, if that’s what you’re looking for, though there is a bit in there toward the end.

What I Loved About this Book: Hands down, the humor. Seriously, I burst out in giggles many times.

What I Didn’t Like: Ok, if I’m being honest with myself, I think I probably hoped for a little more nookie.Â  The chemistry between the two characters is so intense, it’s kind of hard to skirt around the issue.Â  But the lack of sex definitely didn’t deter from my overall opinion of the book.

Should you Read it? Da.