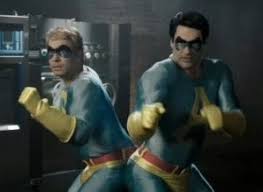 A Proposal of Epic Proportions [reddit] I thought this was adorable.Â  And terribly romantic.Â  Raunchy Ryan approves.

First Look: The Hunger Games [Entertainment Weekly] OooOOooo.Â  Here’s the first peek of Jennifer Lawrence as Katniss Everdeen for the upcoming flick The Hunger Games, based on the best-selling series by Suzanne Collins.

Neil Gaiman rocks Doctor Who [Anglophenia] Well, my fellow Whovians, the master of fantasy has left his mark upon the Doctor Who Universe.Â  Neil Gaiman’s episode, The Doctor’s Wife, aired this past Saturday. What did you think?Â  I personally thought it embodied everything a good episode of Doctor Who should – madness, silliness, romance, and adventure.Â  Oh, and a bit of scariness.

Your Last Minute Rapture FAQ’s [SF Chronicle] So Saturday, May 21st, is the beginning of the end of the world.Â  Having some last minute questions?Â  The San Francisco Chronicle has you covered.

Well, if the rapture does begin on Saturday, I’ll be bartending at a swanky wedding, surrounded by top shelf alcohol.Â  What do you have to add to the list?

An Intellectual (and sarcastic) take on The Rapture: [the parish] In researching info on May 21, I came across this blog and it made me smile.Â  A refreshing and witty take on fundamentalist Christian society and its crazy antics.Â  I always enjoy a good philosophical-yet-down-to-earth romp. I’ll Still be Here May 22 Either Way, or Why the Rapture is an Adorable Heresy

Reasons Why the World SHOULD End [dListed]Â  This video. (the Walmart – Mr. Ghetto video, aka ICANTSTOPSTARINGATTHESHAKINGASSCHEEKS)

Raunchy Ryan drools over latest news on new Assassin’s Creed Game [game informer] I don’t know if any of you out there are into gaming or not.Â  I sort of am.Â  I like playing, but I’m not that good, thus I’m not that hardcore.Â  The exception, however, is for the Assassin’s Creed franchise.Â  This game defines what bad ass is supposed to be.Â  Game one we meet Altair, our assassin in the 12th century.Â  Game two and three we meet Altair’s distant descendant, Ezio, a renaissance ladies man who is forced to pick up the blade to avenge his family’s death.Â  Assassin’s Creed: Revelations is supposedly Ezio’s last chapter.Â  He’s older, now (but apparently still able to scale buildings and move faster than I can at twenty *cough cough* some years old).Â  The game is supposed to answer a bunch of questions left open by the first three games.Â  To say I’m excited is an understatement.Â  I’ve already warned my coworkers not to expect me in the office release day.