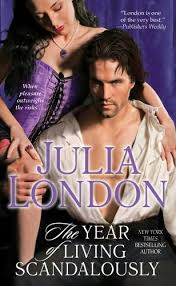 Title: The Year of Living Scandalously

Redonk Nutshell: Woman assumes her cousin’s role as countess and meets resistance with a blast from her past

Official Synopsis: In 1792, the village of Hadley Green executed a man for stealing the Countess of Ashwood’s historic jewels. Fifteen years later, questions still linger. Was it a crime of greedâ€”or of passion?Â  When Declan O’Connor, Earl of Donnelly, arrives at Hadley Green to meet with Lily Boudine, the new countess of Ashwood, he knows instantly that the lovely woman who welcomes him is not who she pretends to be. In an attempt to avoid an unwanted marriage, Keira Hannigan has assumed her cousin’s identity and is staying at the estate while Lily is abroad. When Declan threatens to expose her, Keira convinces him to guard her secret, then enlists him in her investigation of the missing jewels, for she now believes an innocent man was hanged.Â  Unable to deny the beautiful, exasperating Keiraâ€”or their simmering passionâ€”Declan reluctantly agrees. But neither is prepared for the dangerous stranger who threatens to reveal Keira’s lies . . . and Declan knows he must protect Keira at all costs, for she is the woman who now owns his heart.

First thing’s first – I love it when a romance novel spans over a good amount of time.Â  Nothing grates on my nerves more when a story involves two people falling totally batshit crazy in love/lust with each other when they’ve only known each other for a few days and then GET MARRIED at the end of the story.Â  The Year of Living Scandalously definitely takes its time developing its story, and it’s wonderful.Â  The relationships between all the characters really blossom, and by the end of the book you are really invested in their stories.

Keira Hannigan takes up her cousin’s offer to switch roles.Â  Lily tells her it will only be for a few months, at the most, and that no one will think anything of it.Â  Keira jumps at the chance, desperate to stretch her legs and get away from an unwanted suitor. Unbeknown to Keira, the estate of Ashwood has a serious load of baggage that needs immediate attention, and Keira, being a “I can totally fix this” kind of person, decides to meet the challenges head on.Â  In the process the residents of Ashwood mistake Keira for her cousin, a mistake she opts not to correct.Â  Before long she comes face to face with a man from her past, Declan O’Connor, and he knows instantly who she is (and in turn who she isn’t).Â  There’s a good deal of name calling..but imagine it in a lovely brogue.Â  With a bit of convincing on Keira’a part, Declan agrees to let her continue her charade.

We learn that Keira and Declan have a past, a past that involves the loss of a shared friend.Â  Both of them hold themselves responsible for their friend’s death, and The Year of Living Scandalously is mostly the story of the two of them dealing with their emotional baggage not only with themselves but toward each other.Â  It was refreshing to watch their relationship go from bitter to rich.

And of course, the driving subplot to all this is a gothic tale of stolen jewels, the conviction of a possibly innocent man, and the mad Count and his Countess involved in scandalous affairs.Â  There’s a mystery afoot, and together Keira and Declan work to unravel the truth from the fiction.

What I liked about this book: It felt dark and Gothic to me, which I personally love.Â  And I really loved the development of the characters and their relationship toward each other.

What I didn’t like: Some details are a bit far fetched to be believed – how could no one but Declan realize Keira wasn’t actually Lily? If Keira had no knowledge on how to run an estate how on earth did she manage to pull it off?