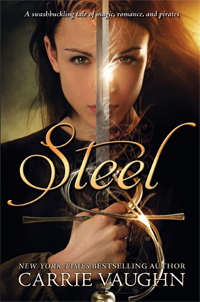 Official Synopsis: When Jill, a competitive high school fencer, goes with her family on vacation to the Bahamas, she is magically transported to an early eighteenth century pirate ship in the middle of the ocean. When Jill finds a rusty sword tip on a Caribbean beach, she is instantly intriguedâ€”and little expects it will transport her through time to the deck of a pirate ship. Will a dark enchantment, salty kisses, and a duel with an evil pirate captain leave her stranded in the eighteenth century forever? Drawing on piratical lore and historical fact, Carrie Vaughn creates a vivid world of swaying masts and swelling seas, where blood magic overrules the laws of nature, romance is in the air, and death can come at the single slip of a sword.

Can I tell you how much I love this cover?Â  I do.Â  I love it.Â  It’s gorgeous.Â  That’s pretty much why I picked this puppy up.Â  That, and the pirates.

Steel begins with Jill losing a fencing tournament, thus putting her in a lingering sour mood.Â  She’s even a sad sack willie while on vacation in the Caribbean (that bitch), obsessing overÂ  the final moves her opponent used to seal her fate weeks prior.Â  Her spirits are lifted when she finds a rusty shard of a sword buried in the sand.Â  She sticks it in her pocket (really?) and keeps it with her.Â  When a boating expedition turns rough and Jill gets tossed overboard, she magically finds herself somehow transported back to 1800’s Caribbean ocean, and is being pulled from the water by…pirates.Â Â  She’s in luck, though, because these pirates are led by a pirate Queen (i.e. a chick captain).Â  Jill signs on to join the crew (against her better judgment) and begins to learn the life of a pirate is not all swashbuckling fun.Â  There’s lots of scrubbing of decks.Â  And swaying cabins.Â  And drinking rum.Â  We learn that the sword Jill found is, in fact, a darkly enchanted sword, who’s other half belongs to a vicious captain that’s been searching for it for years.Â  If he melds the sword back together, he’ll be able to TAKE OVAH THE WORRRRRLD!Â  Thus, Jill and crew try to outmaneuver him, all while trying to figure out a way for Jill to get back to her own time.

Okay, all my snark aside, Steel was fun.Â  It wasn’t my favorite YA read, but it was fun nonetheless.Â  I loved the fencing terminology, and Vaughn really did her research.Â  I don’t know squat about fencing, but I’d love to.Â  If I could get my fat arse up and scrounge up a few extra bucks I’d totally invest in fencing lessons.Â  How badass would that be?Â  Ahem.Â  Anyway…the fencing aspect was pretty cool.Â  I wasn’t really into Jill.Â  I wanted to reach through the book and shake her at times.Â  I had to remind myself that she was, in fact, just a teen.Â  Her journey from beginning to end was refreshing, though.Â  She was intolerable at the beginning and by the end I was able to contemplate shaking hands with her. The pirate aspect was cool.Â  It wasn’t glamorized, which was a nice surprise.Â  It was dirty, smelly and ugly, the way it should be.Â  Vaughn took a few liberties here and there with accuracies, but all in all it worked.

Steel was a fun fluffy read, a book that would have been a perfect for the beach. Har-har.

What I loved about this book: The fencing and swordplay

What I didn’t like: I wasn’t really invested in the characters;Â  the story hasn’t really stuck with me