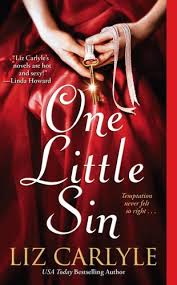 Redonk Synopsis: Babydaddy gets his comeuppance and finds true love in the process

Official Synopsis: He was a scoundrel, a scamp, and a hopeless skirt-chaser. So it shouldn’t have been so surprising when Sir Alasdair awoke after a night of debauchery to see a young lass on his doorstep…with a baby in her arms. She was beautiful, brazen, and utterly bankrupt. So it shouldn’t have been so shocking when Miss Hamilton accepted the rogue’s scandalous proposal to move in with him…and become the baby’s governess. One little sin brought them together. But when one man’s wicked charms are matched by one woman’s fiery spirit, one little sin can lead to another…and another…and another….

This is the first book I’ve read by Liz Carlyle.Â  I was intrigued by the pretty cover.Â  In fact, all of her books seem to have pretty covers.Â  We meet Sir Alasdair in the middle of a romp in the hay.Â  Literally.Â  He’s interrupted by his partner’s shotgun wielding husband.Â  Alasdair seeks to hide amongst his brother and friends, and they all end up seeking shelter in the tent of a fortune telling gypsy.Â  This gypsy reads all their palms and more or less informs them all they are all about to get their lives turned upside down.Â  Foreshadowing, anyone?

The next day Alasdair’s nap o’recovery is interrupted by a fierce storm and a pounding on his front door.Â  His staff admits a young woman carrying a child claiming to be Alasdair’s.Â  Hungover Shocked, Alasdair talks the young Scottish beauty, Esmee, to staying with him as the child’s governess.Â  The baby, or in this case two year old expert tantrum thrower, is the result of a fling between Alasdair and Esmee’s mother.Â  Over the next few weeks Alasdair and Esmee grow close, though they’re guarded.Â  Alasdair recognizes he’s the worst kind of scoundrel, and Esmee harbors a fear that she’s turning into her mother, i.e. a hopeless victim to a handsome flirt.Â  When Esmee’s Aunt suddenly enters the picture and insists Esmee come to live with her, Esmee and Alasdair are forced to re-examine their feelings for one another.

One Little Sin was an enjoyable read, though not my favorite.Â  I like Esmee and her fiery nature – she isn’t afraid to put Alasdair in his place and call him out on his fluff.Â  And I do mean fluff.Â  Alasdair is a handsome and seductive rake, and his transition into a mature fatherly figure is sort of fun to witness, though I don’t know if I necessarily buy into it.Â  Not that I didn’t believe it was sincere – no, for me I think it has more to do with whether a not a man that has been a professed bachelor for thirty six years suddenly turns over a new leaf all because a child enters into the picture.Â  Call me a cynic (or a childless harpy), but I have a hard time finding this…believable, for lack of a better word.

I think what mostly intrigued me about his book was Alasdair’s brother, Merrick.Â  Again, he’s the dark, brooding cynical type.Â  I’m definitely going to pick up his story (Three Little Secrets) because I think it may appeal more to me than Alasdair’s story did.

What I loved about this book: I found this an enjoyable tale, though not one I’d read again.

What I didn’t like: Typical back and forth “I want you but I shouldn’t/can’t” between the hero and heroine that gets old quickly