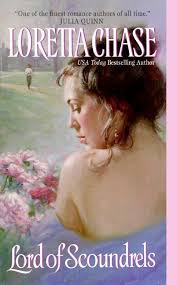 Official Synopsis: They call him many names, but Angelic isn’t one of them.Â  Sebastian Ballister, the notorious Marquess of Dain, is big, bad, and dangerous to know. No respectable woman would have anything to do with the “Bane and Blight of the Ballisters”â€”and he wants nothing to do with respectable women. He’s determined to continue doing what he does bestâ€”sin and sin againâ€”and all that’s going swimmingly, thank you . . . until the day a shop door opens and she walks in.Â  She’s too intelligent to fall for the worst man in the world…Jessica Trent is a determined young woman, and she’s going to drag her imbecile brother off the road to ruin, no matter what it takes. If saving himâ€”and with him, her family and futureâ€”means taking on the devil himself, she won’t back down. The trouble is, the devil in question is so shockingly irresistible, and the person who needs the most saving isâ€”herself!

This is the 2nd Loretta Chase book I’ve read.Â  I picked this up b/c my Library Pimp read it and said she really enjoyed it.Â  I listen to her for a reason, because I really did enjoy this book.

Sebastian Ballister, the Marquess of Dain, is insanely rich, darkly ruthless, and lives notoriously without a conscience.Â  We learn within the first chapter why Sebastian is the way he is, which immediately puts us in a mind to sort of sympathize with him.Â  I say “sort of” because his behavior really is raunchy (I heartily approve).Â  In his entourage is one Bertie Trent, a young gentleman who’s bulb isn’t quite screwed in too tightly.Â  When his sister, Jessica, shows up with intentions to withdraw him from Dain’s clutches, she doesn’t count on finding him rather…intriguing.Â  Jessica is by no means an ignorant miss – she’s bright, whip-sharp witty, and has no qualms about what she wants.Â  She understands her initial reaction to Dain was unmitigated lust.

I’m not going to go into too much detail about how these two court one another and eventually marry.Â  I wouldn’t want to ruin the journey, because there were several times I ended up laughing out loud at these two’s reactions to one another.Â  It’s anything but predictable, and that’s a lovely rare charm in a romance novel.

What I loved about this book: Jessica Trent.Â  I wish I was as quick with my wit as she is.

What I didn’t like: The fact that I got this from the library and don’t own it (may have to rectify that)