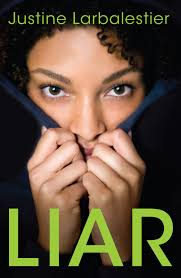 Redonk Nutshell: Micah Wilkins is a compulsive liar mixed up in the murder of her good friend/boyfriend, Zach.

Official Synopsis: Biracial Micah Wilkins, 17, is the quintessential unreliable narrator. On the first page, she readily admits she’s a liar though now she wants to tell her story straight. She attends a progressive private high school in New York City. She’s a bit peculiar, with extra-human speed and sense of smell, and has few friends. After another student, a popular senior named Zach, is found brutally murdered, it comes to light that he and Micah had a relationship outside of school. Now she is considered a suspect.
My dear friend/literature dealer gave this to me on a whim to read, and I’m glad she did.Â  Liar is told from the first person perspective of Micah, a 17 year old growing up in New York City.Â  Right off the bat Micah tells us that she’s a liar, but that she wants to tell her story with no omissions or lies.Â  We learn of her life in NYC, and that she’s always been a bit different and didn’t give two figs about it.Â  When her friend, Zach, is found brutally murdered investigations reveal that Micah’s relationship with him was more than what she originally let on.

I found myself classifying this book into two parts.Â  The first part is like day and the second is like night.Â  Not literally, mind you, but…well damn it I can’t really tell you because that would give it away.Â  Let me just say that this book threw me a whammy half way through that completely walloped me.Â  I didn’t even see it coming.Â  And it was glorious. I found myself sympathizing with Micah, even through her bizarre habit of fibs and twists of truth.Â  Of course, you come to see why she does what she does…but you’ll have to read that yourself to find out.

What I loved about this book: A fun romp through a dark angsty world with a whopper of a plot twist

What I didn’t like: I have a hard time accepting 1st person narratives where the storyteller lies to its reader in an effort to bamboozle them later on in the plot.Â  I don’t necessarily mind it as a plot device but I don’t think it always works.Â  In Liar‘s case it did.Â  Thankfully.