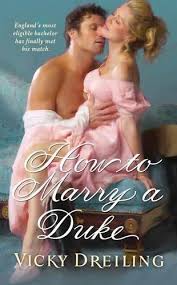 Title: How to Marry a Duke

Official Summary: Tristan, The Duke of Shelbourne, is a man with a mission: find a wife he can tolerate as long as they both shall live. Love is not necessary–nor desired. But how to choose among a dizzying array of wealthy-yet-witless candidates? Hire London’s infamously prim and proper matchmaker. Then pretend she’s not the most captivating woman he’s ever met…

Ho,ho did this cover made me giggle. Really, it did. Half-naked-dude-with-hand-on-chick’s-boob alert.Â  But it’s not really on her boob.Â  It’s just below it. I think.Â  I say “I think” because I haven’t been able to look at it for longer than 0.008 seconds before succumbing to the chilling feeling my mother is about to burst into the room and judge me.Â  And my mother lives 40 miles away.

And that, my fine readers, is pretty much the only negative thing I have to say about this book.Â  I adored it.Â  Our heroine is independent, smart, damn witty, and…get this…normal.Â  She’s not a ravishing beauty with a perfect body.Â  She’s not a harpy (I’m looking at you, Minerva).Â  She’s Tessa Mansfield, a self-imposed spinster who manages to land herself a title of matchmaker.Â  She sees herself catering to the wallflowers, and damn it she’s good at her job.Â  When The Duke of Shelbourne enlists her help to find him a bride in record time, she agrees.Â  Her main reason for agreeing? The bad-ass publicity she’d get out of the deal.Â  Her subconscious reason?Â  The man is intriguing. And, well, kind of good looking.Â  And matches her wit.

In a matter of days, Tessa manages to round up 24 of the most eligible debutantes of the ton, and the girls compete in a series of contests ranging from essays, game show-like quizzes, and one-on-one interviews that left me giggling.Â  At first Tristan is appalledÂ  This was supposed to be somewhat, I dunno, confidential?Â  But then he realizes the merit in the idea and plays along.Â  And of course as the games drawl out Tristan and Tessa end up falling for each other.Â  But admitting their feelings to each other would require both of them being honest with themselves, a task that Tessa has a hard time coming to terms with.

I laughed out loud at the character’s first encounter.Â  The Duke is attending a ball where he feels the giggling presence of several desperate chits just clamoring to drop their fans to get his attention.Â  At this point he’s lost count of how many fans and kerchiefs he’s had to replace.Â  Just as he counts himself clear of the danger he knocks into Tessa, who, of course drops her fan, which he inadvertently tramples. He excuses himself and begs his pardon, to which Tessa says: “You are not to blame. Someone jostled my arm…Sir if you will return the remains I will see to its burial.” He insists on compensating but she cuts him off: “…for my pain and suffering?Â  I assure you the fan’s death is a relief to me.Â  Look, you can see it is exceedingly ugly,“Â  and finally ends with, “Poor little fan.Â  May you rest in peace. *flashes a dazzling smile* There now, I’m done mourning.”

That, my friends, is Tessa in a nutshell.Â  She cracked me up.Â  And Tristan is drawn to it. In fact, she seems to bring out the best in him, and some pretty hilarious lines.

Tessa: “Suppose you were competing with another man for a girl’s affections. The other gentleman brings flowers and sends poetry. What would you do to top him?”

What I loved about this book: the humor, the chemistry between the characters, and the Bachelor-like plot line, which was down right hysterical at times

What I didn’t like: That this is Dreling’s 1st book and I can’t read anymore of her stuff!Â  At least not until July 2011.

I’d highly recommend adding this to your to-read list, and to keep an eye out for Vicky Dreling.