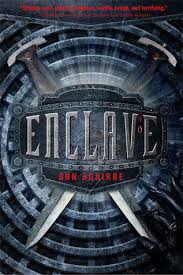 Official Synopsis: In Deuce’s world, people earn the right to a name only if they survive their first fifteen years. By that point, each unnamed ‘brat’ has trained into one of three groups-Breeders, Builders, or Hunters, identifiable by the number of scars they bear on their arms. Deuce has wanted to be a Huntress for as long as she can remember. As a Huntress, her purpose is clear–to brave the dangerous tunnels outside the enclave and bring back meat to feed the group while evading ferocious monsters known as Freaks. She’s worked toward this goal her whole life, and nothing’s going to stop her, not even a beautiful, brooding Hunter named Fade. When the mysterious boy becomes her partner, Deuce’s troubles are just beginning. Down below, deviation from the rules is punished swiftly and harshly, and Fade doesn’t like following orders. At first she thinks he’s crazy, but as death stalks their sanctuary, and it becomes clear the elders don’t always know best, Deuce wonders if Fade might be telling the truth. Her partner confuses her; she’s never known a boy like him before, as prone to touching her gently as using his knives with feral grace. As Deuce’s perception shifts, so does the balance in the constant battle for survival. The mindless Freaks, once considered a threat only due to their sheer numbers, show signs of cunning and strategy… but the elders refuse to heed any warnings. Despite imminent disaster, the enclave puts their faith in strictures and sacrifice instead. No matter how she tries, Deuce cannot stem the dark tide that carries her far from the only world she’s ever known.

You know, I’m pretty sure “dystopic” isn’t even a world, but I’m pulling a Palin and using it anyway.

I’ve previously read Ms. Aguirre’s Grimspace, an adult sci-fi novel, that was a wallop of a good time.Â  I came across Enclave because a) many of the bloggers I follow continuously raved about this book and b) I think the cover is fantastic.Â  Enclave is Ann Aguirre’s first foray into Young Adult fiction, and she’s latched into the next fad, which seems to be dystopia, with an iron grip.Â  I think it’s safe to say that Aguirre is a pro at writing a kick-ass heroine.Â  Deuce is a lethal and independent young woman, a Hunter who has just come into her own.Â  Her sole purpose is to protect the Enclave – the small band of people that live in the tunnels below ground.Â  When she’s banished for trying to protect her friends from the stick-in-the-mud Elders, both she and her partner are forced to seek shelter Topside, and she comes to realize that the world is not what the Elders had made it out to be.

Throw in a bit of romance with her partner, the dark and mysterious Fade, and you’ve got a wonderful plot line that leaves you anxious to keep turning the pages.Â  Enclave is the first in Aguirre’s Razorland series.Â  I enjoyed this book quite a bit.Â  It’s pacing is just right, and the story is intriguing and engaging.Â  Deuce and Fade make a fantastic pair, and I look forward to seeing what Aguirre does with them.