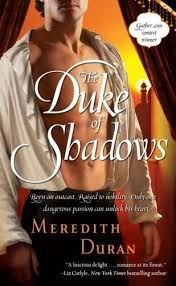 Today’s post is brought to you by The Duke of Shadows, by Meredith Duran.

For the past six months or so I’ve been on a romance kick.Â  My husband claims he’s lost me to smut, and *hangs head in shame* he’s right. I never really considered myself a romance reader.Â  Something about books with cover pictures of half naked people turned me off (kind of the opposite ideal effect, eh?).Â  Back in August 2010, a friend recommended I read Darkfever, by Karen Marie Moning, and that sort of started the snowball. From there I began my escapade into romance.

I came to realize I liked historical romance the most. But I’m finicky. Virgins? Meh.Â  Simpering debutantes? Noooo thank you. Yeah, I came across several cliche regency romances during my reads, but along the way I found some gems, too.

Thus we come to The Duke of Shadows, by Meredith Duran. This bad boy ain’t set in England. Not at first, anyway. Imperial India under British Rule, right before the shite starts to hit the fan.Â  Our heroine, Emmaline Martin, comes to India to join her betrothed.Â  She doesn’t arrive as she would have hoped – no, the boat that carried her and her family sunk, leaving her the only survivor.Â  And that’s the prologue.

Emmaline comes to figure out her finace is a bit of an arsehole. Thus enters his cousin, Julian Sinclair, the Duke of Auburn. You know…one of these guys that has a title but doesn’t really want it blah blah blah. Difference is, Julian is kind of actually a decent guy, albeit dark and brooding, but he’s caught up in his mixed English/Indian parentage. Sparks fly between the two, and when the Indian revolution violently explodes around them, the two rely on each other to escape to safety.Â  Oh, and did I mention that Emmaline’s fiance is an arse?Â  Julian & Emmaline have to separate along the way (after some serious one on one time *eye brow waggle*), but Julian vows to come back for her.

Fast forward several years – England.Â  Emmaline managed to find her way back to close friends but not without some serious PTSD.Â  She deals with it by painting.Â  And it’s good stuff, so good that people want to buy it.Â  Julian and Emmaline manage to reconnect, but not without some serious rehashing of unmet expectations (hello…you said you’d come back for me?), as well as a crazy ass plot involving a mysterious dude trying to off Emmaline b/c of things she painted that may or may not *dun dun DUUUUNN* reveal a traitor amongst the British Army.

What I loved about this book – it takes place over many years.Â  There’s no wham-bam-I’m-in-lurve crap going on here. The relationships between the characters really blossom, and Duran does a great job of expounding on it. I enjoyed the Indian setting. Very descriptive, but also damn bloody and violent. There’s romance, but none of the too cliche cheesy stuff I tend to glaze over.Â  They’re believable.

What I didn’t like about this book – uh. Hmm. Half naked dude on the cover? I dunno.

Should you read it? Hells yeah.

This was Duran’s debut novel.Â  Dirty bitch. *eyes her with envy*