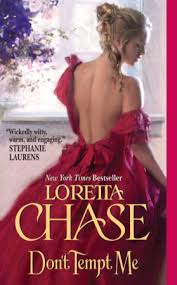 Official Synopsis: Spunky English girl overcomes impossible odds and outsmarts heathen villains. Thatâ€™s the headline when Zoe Lexham returns to England. After twelve years in the exotic east, sheâ€™s shockingly adept in the sensual arts. She knows everything a young lady shouldnâ€™t and nothing she ought to know. Sheâ€™s a walking scandal, with no hope of a future…unless someone can civilize her.Â  Lucien de Grey, the Duke of Marchmont, is no knight in shining armor. Heâ€™s sarcastic, cynical, easily bored, and dangerous to women. He charms, seduces, and leaves them–with parting gifts of expensive jewelry to dry their tears. But good looks and charm, combined with money and rank, make him welcome everywhere. The most popular bachelor in the Beau Monde can easily save Zoeâ€™s risquÃ© reputation . . . if the wayward beauty doesnâ€™t lead him into temptation, and a passion that could ruin them both.

Loretta Chase is quickly becoming a favored author or mine.Â  I’ve read three of her novels, now, and all of them have been witty, romantic, and dead sexay. Lord of Scoundrels remains my favorite so far.Â  Don’t Tempt Me, however, was a pretty close contender.

Zoe Lexham was captured during a holiday to Cairo when she was twelve years old.Â  Many years later she made her escape and found her way back home.Â  Only now, she has some serious adjusting to do.Â  She’s on the verge of scandal, having been raised in a harem, and she wants nothing more than to re-enter into the life she was destined to have.Â  She seeks the help of her childhood friend, Lucien de Grey, now the Duke of Marchmont.Â  The two of them had been thick as thieves as children, Lucien the only one who seemed to be able to handle the rebellious Zoe.Â  The years had hardened Lucien, however.Â  He’s seemingly uncaring and cynical.Â  He’s not a rake, mind you, but he does have something of a reputation.Â  When Zoe re-enters the picture he’s skeptical at first.Â  But one look at her and he knows it truly IS her.Â  He takes her under his wing to help salvage her reputation.Â  Of course, grown up Lucien and Zoe end up having an intense chemistry, and craziness ensues.

I really, really loved this book.Â  I was initially skeptical with the whole harem-girl-turned-debutante plot.Â  Surrender of a Lady, by Tiffany Clare, had a similar plot and it didn’t quite work for me.Â  Too many cliches, I suppose.Â  Loretta Chase, however, managed to avoid these pitfalls by focusing on her heroine’s time in the present, not the past.Â  Don’t get me wrong, you learn about Zoe’s time in the harem.Â  But it’s not the point of the novel.Â  Zoe is hilarious – being completely unfamiliar with prudish English custom, the things that come out of her mouth are flat out hysterical.Â  She’s a firecracker, too, with a hell of a temper.Â  She throws things when she gets angry, and unlike her harping sisters, she says exactly what’s on her mind. Lucien matches her perfectly.Â  He’s stubborn, sarcastic, and secretly compassionate.Â  They irritate each other to the point of having full blown public fights involving flying books and hairbrushes.Â  There was a scene in a dress shop that had me rolling.Â  The two argue madly, Zoe throwing a book at him as he turns to abandon her, knocking his hat to the floor. He storms out, and Zoe continues on as if nothing odd had occurred.Â  Not even a few minutes later, Lucien returns, calm and composed, picks up his hat from the floor, and takes a seat in the chair across from her, effectively resuming where they had left off before they started arguing.Â  CLASSIC.Â  Their relationship is wonderful.Â  There’s not a cowering bone in Zoe’s body.Â  She has no fear.Â  She’s in touch with her sensuality.Â  What I especially loved about her is how she handled the discovery of her feelings toward Lucien.Â  She recognized she wanted him.Â  She knew that she probably shouldn’t, but ultimately she decides to just go with it, and doesn’t look back.Â  No regrets, that Zoe.Â  It was a refreshing take on a historical heroine.

Lucien was great, as well.Â  He handled Zoe exactly as she needed to be handled.Â  He didn’t coddle her. He spoke to her as if she were an intelligent adult and not a delicate flower.Â  He respected her temperament and was able to predict what would and what wouldn’t set her off.Â  Ultimately, they respect each other, trust each other.Â  It’s why, when their relationship takes its next steps both of them only slightly hesitate before plunging in head first.

I have a few other books by Loretta Chase I’m looking forward to reading.Â  In the meantime, I’d highly recommend giving Don’t Tempt Me a go.

What I loved about this book:Â  Romantic, sexy, and funny all in one lovely package