The Surrender of a Lady, Tiffany Clare 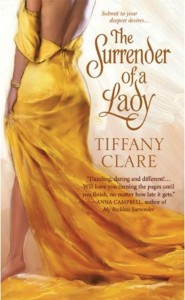 Title: The Surrender of a Lady

I would be lying if I said I didn’t enjoy this book.  Because, well, I did.  It was a fun read.  I personally was fascinated by Elena’s horrific descent from noble lady to harem harlot.  She’s sold into slavery by her husband to settle his debts, and after about a week in the slave market she’s sold to a harem.  Clare takes a few chapters to allow her character to transition into her new role.  Elena rechristens herself “Jinan” and spends the next five years accepting and welcoming her role as a concubine.  I think what fascinated me most about this transition was what on earth miracle depilatory those ladies used…whatever it is, I want it.

The main plot drive of the book is Griffin and his desire to have Elena, aka Jinan, and how far he goes to have her.  Er…own but not “own” her.  Apparently, people, Griffin and Elena had a twelve hour engagement and they were, like OH SO TOTALLY IN LOVE but it didn’t last so Elena married another guy who ended up being a total asshat. Bummer.  So when Griffin is dragged by his friend to a harem to lighten his broody mood, he is shocked to find his once true loooove now servicing men.  So what’s he do?  Well, he buys her, of course.  For three months.  Then he kidnaps her against her will…er…I mean rescues her.  But her pimp comes a callin and takes her back.  Oh…and Janin is all like “my SON! You left my son behind!” because the whole POINT of her accepting this harem life was that her protector pimp but not a pimp would allow her son to stay with her and would take care of them both.

*sigh* SO…there’s a bunch of “I want you but I can’t” going on here that totally takes a back seat to the crazy SMEXY times that are had.  I think Clare tried to really have an angsty romance going on here, but she didn’t quite pull it off.  But honestly, I was ok with that.  I don’t mind a good sex-but-no-substance book now and then.

What I loved about this book: The harem life – faaaaascinating

What I didn’t like: I wasn’t invested in the relationship of the characters, and didn’t really care to be

What I Did for a Duke, Julie Anne Long